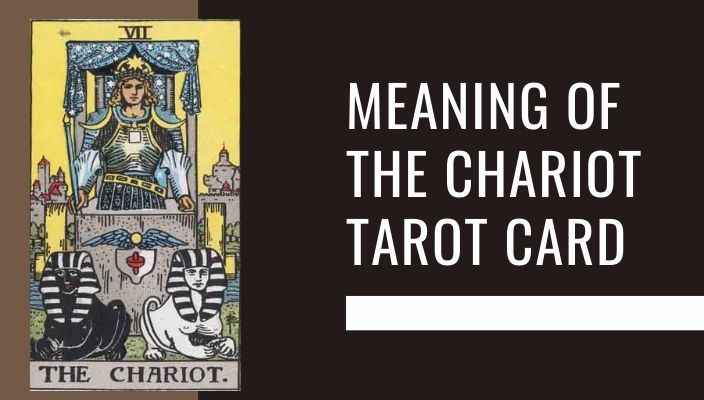 The Chariot Tarot represents success, ambition, control, and willpower. Ruled by the zodiac sign of Cancer in astrology, the chariot represents the water element and talks about how controlled emotions and movement can lead to success.

When the Chariot appears in your tarot spread, know that the obstacles ahead can merely be solved by taking the lead and facing the challenges head-on.

The Chariot is the card of success, and it mostly means a guaranteed victory in any aspect of life. Like a charioteer, controlling the movement of the chariot will lead you to your destination.

In a lot of interpretations, the chariot denotes literal movement between cities or countries. Some readers call it a card for buying vehicles and cars.

The Chariot is a card that has a lot of divinity references. We see a fierce warrior standing inside of a chariot that two Sphinxes lead. Both the sphinxes are of polar opposite colors and nature and are facing in opposing directions.

The warrior holds no reins to steer them but controls the movement of the chariot by his sheer willpower and strength alone. The figure stands beneath a blue canopy decorated with stars connecting him with the heavens and divine.

He wears two crescent moons on his shoulders which refers to celestial bodies. We see a river flowing in the background that refers to the emotional realms of water signs.

The Chariot is the trump card of major arcana of the tarot deck that speaks of hard control. It tells you to take the reins back of your line and shift to the driving seat from the passengers and control the wheel of your life

. When the Chariot appears in your reading, there is time for you to follow through with actions to achieve goals. It is a great card to get if you consider moving to a city or another country as it guarantees victory.

The chariot always wins as long as he knows where he is going and what he needs to do to achieve that destination.

The Chariot speaks of willpower, determination, and hard control of your actions. Sometimes The Chariot appears in your reading when you need to move to a different place especially using a car.

In a love reading, the Chariot speaks of definite movement. If you are in a long-distance relationship, The Chariot says that you will travel to meet your partner. It can also mean that there will be a quick movement within the relationship, which will be successful for you.

The Chariot motivates the singles to control their love life and pursue if they are interested in someone. Since the chariot is a card of guaranteed success, ensure you are taking action and creating movement in changing the dynamics of your love life.

The Chariot appearing in a love spread also denotes meeting someone while traveling that becomes a special part of your life.

The Chariot Tarot card denotes quick movement, guaranteed results so long you are in control. From a career perspective, the Chariot promises success in business ventures or promotion in the current job.

An idea you have been tossing around will finally be accepted and approved. If there is a business you want to start, now is the time to sow seeds to give great outcomes.

From a finance and money perspective, the Chariot Tarot is a great card to get. It encourages taking control of finances and not riding along with waves. Planned and structured finances will yield you great results.

In an upright position, The Chariot can indicate digestive or gut ailments. If you are sick for some time, your condition will improve, and you will have new energy.

The Chariot denotes quick movement so an ailing person will not be sick for long and will have improvements as long as he keeps a positive mind and seeks appropriate treatment.

When you get the Chariot upside down, it can indicate that you are asserting aggression in achieving your goals. The hard control to give you victory has turned into aggression, and you are becoming a control freak.

It indicates you have lost control of the steering wheel, and you are being steered in any direction without any definite goal or reason.

The reversed chariot warns you of the directionless voyage in life, which can lead you to traps, failures, and disappointments.

When Chariot appears in an upside-down form, the love advice one can give you is to back off a bit. Your current approach to love is forceful and not natural, and this can not be the basis of long and lasting relationships.

The reversed Chariot can also indicate you are unable to balance love with other aspects of your life. It can mean physical distance between two partners is there, and both partners cannot travel to see each other.

The Chariot can often embody obsession with the idea of love and finding love. We are called to let go of excessive control and greet life with enthusiasm and zest and believe the rest will follow.

The upside-down form of the Chariot can indicate a lack of willpower or, conversely, too much ambition to achieve goals. The reversed Chariot advices us not to get to the end of ambition and always maintain a balance.

If you are exerting unnecessary pressure on your colleagues or employees, it is time to relax. If you are in a managerial position, the reversed Chariot warns you of micromanaging.

You need to not focus on every small detail and be fine with it. The upside-down Chariot warns you not to take rash financial or investment decisions.

The Chariot as feelings

The Chariot denotes a fierce and passionate love. It signifies the manifestation of love in movement and action.

If you want to know how someone feels for you and the Chariot graces your reading, it means they want to move towards you, and you have sparked their interest. They want to build a loving relationship and cares about you.

The Chariot in past Position

The Chariot in a past position indicates that you successfully crossed an obstacle that has led you to success in the present.

You crossed a hurdle in the past and enjoyed the benefits of bravado and fearlessness in your current position.

The Chariot in the Present position

In the present position, the Chariot speaks of an impending victory. A major victory is on the card, and all your determination and ambition are going to pay off.

It encourages you to brace yourself as your life will drastically change with that success and awaited victory. It can also signify that travel is in the cards.

The Chariot in Future Position

As an outcome, the chariot is a great card to get. It promises you that all the hurdles you face now or will face in the coming days will lead you to success and realization of goals.

It messages you of great times ahead. The Chariot as an outcome welcomes you to take control and find success.

The Chariot as a person

A person with a Chariot-like personality is heroic, brave, and ambitious. You will rarely find this person in pitty party and always motivated to achieve goals. He/she believes in forwarding movement of life and will not stick in the past.

Fueled with immense hunger for success, this person is likely to be very successful. He makes up a great friend, and he always keeps others around him motivated. They are a travel enthusiast and like exploring new places.

The hard control of the Chariot can easily become too volatile and aggressive, and there is a need for this individual to check if the means they are using are too extreme.